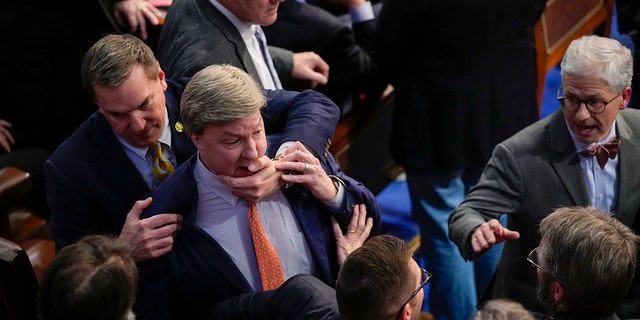 Gaetz and Rogers weren’t the first: Here are the wildest times lawmakers have come to blows inside the Capitol

Rep. Kevin McCarthy’s, R-Calif, bid for speaker nearly caused a fistfight as Rep. Mike Rogers, R-Ala., had to be restrained in a confrontation with Rep. Matt Gaetz, R-Fla., but it would’ve been far from the first time a disagreement among lawmakers came to blows in the Capitol.

Both the House of Representatives and the Senate of a checkered history of lawmakers attacking one another over various disagreements, with the fights ranging from a single punch or a beating with a cane to the drawing of firearms on the floor.

One of the first widely recorded incidents came in 1798 between Roger Griswold and Matthew Lyon, a pair of lawmakers from Connecticut and Vermont respectively. Griswold called Lyon a “scoundrel” during a disagreement, considered an aggressive curse at the time. Lyon responded by spitting in Griswold’s face, and the two then went at it until their colleagues separated them.

The pair weren’t done, however, as Griswold again attacked Lyon a few weeks later, this time using a cane. Lyons defended himself using a pair of fire tongs, according to the Congressional record.

THE VOTE FOR HOUSE SPEAKER

Unsurprisingly, many fights between lawmakers centered around debates…