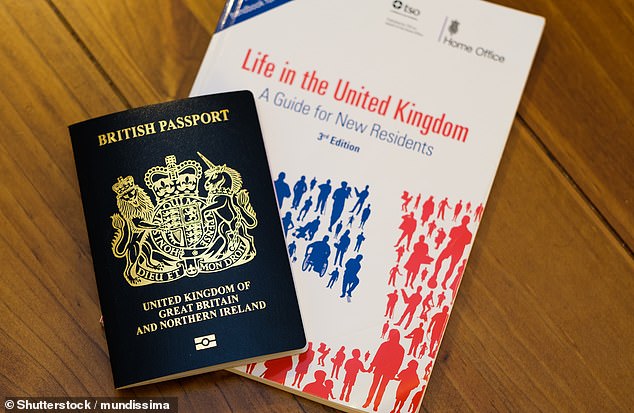 Could YOU pass the British citizenship test?

The UK citizenship test is to be rewritten after complaints it is so difficult that even British people would struggle to pass it.

Applicants must study the Life in the UK handbook and then pay £50 to take the test before they can obtain British citizenship or settlement in this country. The pass mark is currently 75 per cent.

Last year, a Lords committee said the test should be urgently reviewed because some of its content was inaccurate, trivial and misleading.

‘The UK today is about more than stereotypes such as roast beef and pantomimes,’ said committee chair, the Lib Dem peer Sally Hamwee.

To become a UK citizen, you need to pay £50 to sit the test and at least 75 per cent correct answers to pass

‘The content of the history chapter is so insensitive as to be offensive. It urgently needs replacing.’

Home Office minister Simon Murray is promising a review of the test by June, according to The Mirror.

The House of Lords justice and home affairs committee report, published in June, said: ‘The content of the current edition of the Life in the UK handbook comes across as a random selection of obscure facts and subjective assertions that most people would not know,…